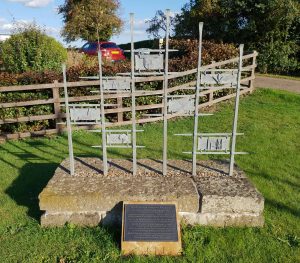 The Millennium Sculpture was made by the James Brothers blacksmiths of Broughton and was made from iron reclaimed from the old Cransley furnaces which was situated on the junction of the A43 and A14. The seven plaques depict the history of our parish. The sculpture was erected in 2000 from local subscriptions and donations made in the parish and the individual plaques tell the following story. 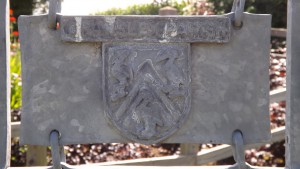 The top plaque shows the coat of arms of the De Cranesley family from the medieval period showing three cranes divided by a vertical chevron. Contemporary glass is to be found in Cransley church showing this emblem. This coat of arms gives rise to the name of our public house “The Three Cranes”.

This plaque depicts Cransley Reservoir which was constructed in the 1880’s to provide water for Kettering and Cransley furnaces. It is now privately owned and used by Cransley sailing club covering approximately 75 acres. 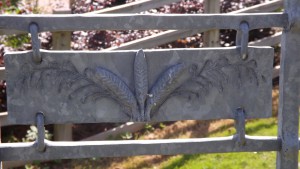 This plaque depicts agricultural produce particularly wheat and oats which have been grown in the village for centuries. It also represents all forms of agriculture which is the main use of the land in our parish. 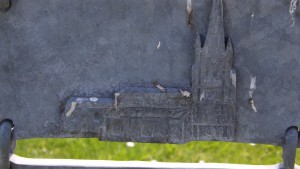 This plaque depicts Saint Andrews church in Church Lane which was mainly constructed some 800 years ago. It is a treasure house of village history and has many interesting memorials and stained glass windows including the world famous American window which was given to the United Kingdom by the United States Of America in 1944 to commemorate the important collaboration between our two nations to defeat Nazi Germany. Many American Servicemen attended our church during the war as there were many American Airfields close by. The then vicar the Revd. Greville Cooke used to broadcast on BBC Radio from “somewhere in England” church services to the troops and our country. It depicts important scenes of the war including the famous meeting between Churchhill and Roosvelt at the Yalta conference were Churchhill is smoking his famous cigar. This is supposed to be the only stained glass window in the world depicting a man smoking. 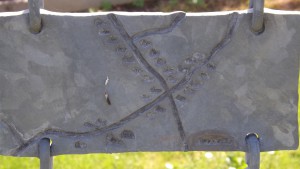 This plaque depicts the road layout of our village with the houses dotted along. This shows Loddington road / Cransley Hill and Church Lane / Bridal Way with North field road leading off. 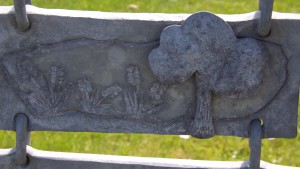 This plaque depicts the woodland and wild flowers of our parish. Cransley wood is an ancient woodland area formally part of Rockingham forest. The wild flowers are bluebells which denote England’s wild woods. The tree is an oak tree as Cransley was once renowned for the quality of its oaks which were much sought after in the 18th century. All the old woodland trees were felled during the 1939 – 1945 war as part of the national need for timber. In the middle of Cransley wood is a feature marked on early maps as “tumulus” or mound and it is thought it may be the site of a early defensive building. 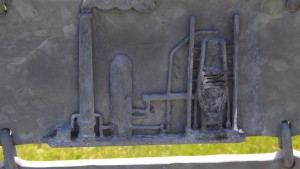 This plaque depicts Cransley furnaces which were built in the 1890’s to remove iron from the locally mined iron ore. This new local industry saved the Cransley estate from bankruptcy as it had been on the market since 1884 and was not sold until 1903 when the iron revenues began to flow. The furnaces closed in the early 1960’s and became the main depot for the destruction of steam trains after the Beeching cuts. The site is now known as Cransley Park and await to see what is to be constructed on the site.